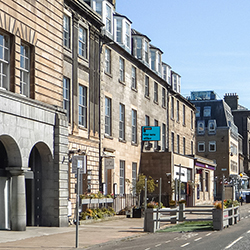 Planning and development consultancy Lichfields has announced that it is moving to a larger office in Edinburgh.

The consultancy will move from 101 George Street to 115 George Street, following five years of "consistent growth".

Senior director Nicola Woodward has been running the Edinburgh office since 2015.

Jade Scott-Meikle helped Woodward set up the office in 2015 and has now been appointed associate director.

Gordon Thomson has been promoted from associate director to planning director.

Tabitha Howson and Arabella Stewart-Leslie are both planners at the Edinburgh office and make up the rest of the five-person team.

Woodward: said: “We need more space to grow and despite new and more flexible working approaches, having an office base is very important.

“A return to the office after an extended period of home working is very much looked forward to and having a fabulous new space to do business in the heart of Edinburgh is fantastic. The new office will accommodate our growth over the next five years.”