New appointments made at Richborough Estates 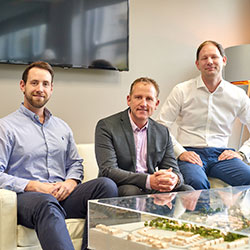 Martyn Grimes and Nick Banks will be based in the Birmingham headquarters.

Grimes joins Richborough Estates from Bovis Homes, where he was land director. He will lead the newly formed Midlands region.

Bank’s focus will be the south eastern region. Having worked for Ptarmigan Group and Barkway Land, he has “significant” experience in planning and acquisitions.

Karl Parkinson-Witte, co-managing director for Richborough Estates, said: “As the housing shortage continues to dominate the political agenda, our role is evolving. Whilst we are land promoters first and foremost, we are increasingly advising and leading debate, ensuring that government and local authorities address the growing need for the right housing in the right places.”

As part of the strategic restructuring of its geographic areas, existing team members Jon Bloor and James Bradshaw have been promoted to divisional directors for the western and eastern divisions respectively and have overall responsibility for approximately 40 projects each.