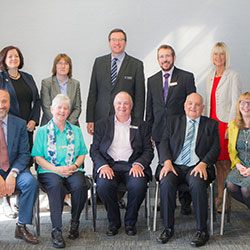 The Scottish Federation of Housing Associations (SFHA) has announced the election of its new chair, following its annual general meeting.

Gerry O’Sullivan will take from Steve Delaney, who has served as chair since August 2014.

Delaney, a board member of Grampian Housing Association, will continue as a board director of the SFHA. He said: “As someone who grew up in social housing, the opportunity to serve as chair of the SFHA has truly been an honour and a privilege beyond what I could have imagined. It was an opportunity to give something back to society, and there was, certainly, never a dull moment, nor one without challenges, over the past three years.”

Before retiring, O’Sullivan worked for more than 30 year in social housing, including time spent at Glasgow Housing Association. He is a board member and former chair at Bield Housing and Care.

O’Sullivan said: “I look forward to working with our new chief executive, Sally Thomas, and SFHA board directors and staff, to lead the sector through the challenges the coming years will bring.”

The SFHA has also announced that Nile Istephan, chief executive of Eildon Housing Association, will continue as the vice chair.