The Friday Five - five planning jobs from The Planner Jobs site, on a Friday. Makes sense to me.

The job: "SSEN Transmission owns and operates the electricity transmission network in the north of Scotland, transporting energy from where it is generated to where it is needed, providing a safe and reliable supply of electricity to the communities it serves.

"You will work on iconic, national infrastructure projects directly facilitating Scotland’s ambitions to meet net-zero through the transportation of renewable energy to the centres of demand.

"We would love to hear from individuals who have detailed knowledge of the Scottish Planning Process, Consenting regimes and Environmental Impact Assessment legislation." 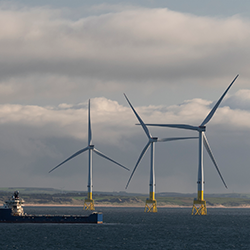 Fun fact: Renewable electricity met an astonishing 97 per cent of Scotland's electricity demand in 2020, narrowly missing the government's target of 100 per cent generation by the end of 2020. Scotland also has one of the stiffest net zero carbon targets in the world, aiming to reach net zero emissions by 2045.

Around 70 per cent of this electricity comes from onshore wind, followed by hydro and offshore wind, and the renewables industry employs close to 18,000 people in Scotland. Domestic and commercial transport accounts for around a quarter of the energy used in Scotland, with heating taking up around half - and generating more than half of emissions.

Scotland might have hit that 100 per cent target were it not for delays in constructing offshore wind farms caused firstly by conservationists expressing concerns about their impact on bird life; and secondly by objections to offshore wind by a certain Donald Trump who complained that wind turbines would spoil the view from one of his golf courses.

Friday Five doesn't have the space to address either of these objections in detail but, suffice to say, bird deaths caused by wind turbines are negligible compared to bird deaths caused by fossil fuel use (and window strikes and pet cats and car collisions and pesticides and even killing for sport); and Donald Trump's golf courses have wrecked sensitive sand dune habitats in North East Scotland which were a haven for ground nesting birds. There may be more than a touch of hypocrisy here from the former US president, fossil fuel advocate and property developer whose buildings have, er, windows. We doubt he's a cat owner though.

The job: "Blackpool Council offers an exciting opportunity to work in the UK’s most popular seaside resort, synonymous with fun and entertainment, attracting more than 10 million visitors a year. Blackpool is also the main retail, public administration, cultural and service centre for the Fylde Coast, supporting a population of around 326,000.

"The development management team is seeking an enthusiastic and experienced planner to play a key role in shaping the future of the resort. Dealing with major development proposals of significance and assisting in the management of the team, you will have a proven track record of managing a complex and challenging caseload including excellent inter-personal skills and effective negotiation. Up-to-date knowledge of planning policy and legislation is essential. Blackpool offers a unique experience to broaden your professional experience and deliver real difference."

Most famous now for playing Remus Lupin in the Harry Potter film series, he's had a lengthy and extremely varied film and Television career which marks him out as one of the UK's most distinctive actors of recent decades. He first came to prominence as Johnny, a loquacious, paranoid and homeless pseudo-intellectual in Mike Leigh's semi-improvised dark comedy Naked in 1993.

From here, his career has never been predictable and he remains hard to categorise, adventurous and extremely versatile. He's played in fantasy movies (the Harry Potters, The Island of Dr Moreau), period dramas (Restoration, Black Beauty), comedy (The Big Lebowski), violent drama (Gangster No.1), superhero epics (the Wonder Woman films), serious, thoughtful drama (The Lady), offbeat TV (Fargo) and so on. He's also directed films and written a novel.

Not bad for someone who started out as a guitarist in a punk rock band and only got into acting because (he says) his mates were doing it.

The job: "We're recruiting for an enthusiastic and self-motivated team player who will play a leading role in delivering high quality development across the District.

"As HS2 Project Officer you will co-ordinate and lead on the district council's response to the HS2 proposal. This high profile post will also involve engaging with and supporting members of the public, community groups, partners, and stakeholders; recommending and issuing decisions on all types of planning and related applications; and where necessary defending the council's position on appeal.

"You will be enthusiastic, self-motivated and willing to learn, whilst being able to work with minimal supervision. You will also have excellent communication skills and be able to work to tight deadlines, whilst focussing on delivering good customer service and high quality development." 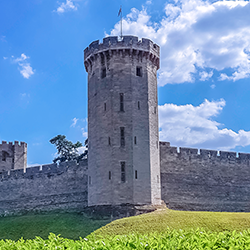 Fun fact: Warwick lays claim to one of the earliest, and least celebrated, English heroes of myth and legend - Guy of Warwick, whose exploits have sadly been overshadowed by the legends of King Arthur and Robin Hood.

In fact, the Guy of Warwick story is an excellent one that involves a low born figure proving his worth to a princess by killing all sorts of horrifying beasts (including the brilliant Dun Cow that terrorised Warwick locals), earning victory in knightly combat, going on a pilgrimage to Jerusalem in penance for his killing, doing more killing, saving the nation in a fight with the Vikings' main man and finally settling into a hermit-like existence at the end of his life.

The Guy of Warwick story cycle appeared in the late Medieval period (early 13th century) around the time that the legends of King Arthur and Robin Hood were being first circulated. It was a time of myth creation and storytelling across the European continent and Guy's story contains all of the classic elements of chivalric romance. the Dun Cow, by the way, is remembered in the name of a number of pubs in and around Warwick and in the name of Guy's Tower at Warwick Castle (pictured). You can read more about Guy of Warwick here.

The job: "The University's Department of Property Management and Development is one of the largest providers of property education in the UK. We pride ourselves on delivering high quality, vocational, professionally accredited courses at both undergraduate and postgraduate levels.

"The role involves contributing to teaching property related subjects. This will include creating inspiring learning materials, delivering teaching sessions and grading, assessment and provision of feedback to students. The successful candidate will contribute to the academic management and development of courses, scholarly activity and research.

"The role requires knowledge and skills in one or more of the following specialisms:

"We particularly welcome applications from candidates with industry or professional experience in any of these specialist areas." 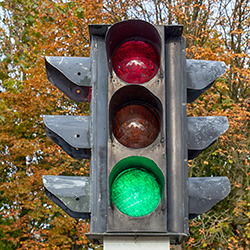 Fun fact: The first traffic light was invented by a British railway manager who specialised in designing signalling systems for Britain's growing railway network. John Peake Knight, born in 1828 had worked in the railways since the age of 12 when he was inspired by the rail signalling system to create something similar for the nation's increasingly congested roads.

Indeed, 1866 - the year Knight had his idea - saw 1,102 people killed and 1,334 injured by horse-drawn traffic in London alone. Until Knight's intervention, traffic was controlled at busy intersections by several policemen, with variable success. Knight's first traffic light was installed at the junction of Bridge Street and Great George Street in Westminster, London - within sight of the Houses of Parliament - on 9 December 1868. operated by a policeman, it stood 22 feet high and employed a railway-like semaphore system during the day and red and green gas-powered lamps by night.

Unfortunately, the lights only lasted a month. Although successful in controlling the flow of traffic and pedestrians, they were removed after a gas leak caused an explosion that wounded the policeman operating the light. It wasn't until 1929 that London saw its first set of electric traffic lights. But Knight had established the principle, and the red and green colour system that has become universal. As for Knight, he was appointed traffic manager for the London to Brighton line in 1869 and general manager the following year. He did much to improve railway safety during his career, including introducing improved braking systems, safer carriages with communication cords, electric lighting and Pullman cars.

The job: "An exciting opportunity has a risen for an ambitious candidate to strengthen our development management team. We are looking to employ a senior level enforcement officer on Grade 7 to reflect the complex nature of work the post holder will be expected to undertake.

"You will be responsible for handling planning enforcement cases, dealing with retrospective planning applications, prosecutions and appeals. The successful post holder will also be expected to mentor more junior members of the team.

"You will be an excellent communicator, comfortable with handling conflict and negotiating solutions to challenging problems. We will also give you the opportunity to broaden your skills and gain valuable experience to support your career development." 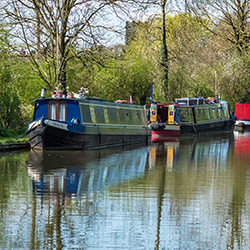 Fun fact: Ashby-de-la-Zouch Canal, which runs through Hinckley, is the first canal to have a new section authorised under the Transport and Works Act 1992. The Act was passed to provide a system by which the construction of rail transport, tramway, inland waterway and harbour infrastructure could go ahead by order of the Minister of State for Transport rather than, as before, on the passing of a private bill.

On the case of the Ashby Canal, the Transport and Works Order was obtained by Leicestershire County Council to aid the reconstruction of the canal. Opened in 1804, the 31-mile long waterway served the collieries that dotted the Leicestershire coalfield, enabling extracted coal to be transported to the Coventry Canal and thus further afield.

As railways grew and mining declined the canal fell into disuse and was finally closed in 1966, by which time there were just 22 miles of navigable canal - much having been lost to subsidence caused by mining. Efforts to reconstruct the canal kicked off in 1992 and the country council managed to acquire almost all of the land required. The Transport and Works Order, granted in 2005, allows for compulsory purchase of remaining land required to restore the canal as close as possible to its original route, parts of which are now obstructed by roads. Parts of the revised route will follow a disused railway line, and will also include an aqueduct over Measham High Street.

Restoration was interrupted by the Covid pandemic, but is expected to resume in the near future.