It’s the Friday Five - our weekly selection of the most must-have jobs in planning. All five of them.

The job: "Laurence Associates is seeking to appoint a senior town planner to join its growing team in Truro, Cornwall.

"We are a well-established, professional and friendly practice with a thorough understanding of the complex planning process and a proven track record for securing planning permission for challenging sites. We attract nationwide commissions on a range of projects, from high end residential developments and commercial schemes to luxury coastal properties and individually designed homes. Our team of in-house planners, architects and landscape architects work collaboratively, offering a fully integrated approach to development, from concept to completion." 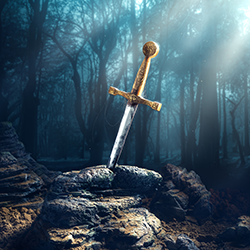 Fun fact: Discovered in 1998, the Arthur Stone is seen by some to provide evidence of the existence of a historical King Arthur. The stone was found in a securely dated sixth century context at Tintagel and appears to have been some kind of dedication stone for a public structure. It bears a deeply cut Christian motif and a more lightly cut inscription in Latin (possibly some form of graffiti) that translates as: "Artognou descendant of Patern[us] Colus made (this)."

According to Wikipedia the name Artognou means "'Bear Knowing' and is cognate with the Old Breton name Arthnou and Welsh Arthneu". Some have jumped on this, saying Arthneu is a variation of the name Arthur and, because the stone was found at Tintagel, which is associated with the legends of King Arthur, this is proof of the existence of a historical King Arthur. Scholars are sceptical of this theory...

The job: "We now need an exceptional planning specialist with high level skills in research and processing to fill a crucial role at one of the most exciting authorities in the country. You will need to be ambitious, dynamic, and inspiring to work with our team, key stakeholders and local communities.

"The role will include leading on the key projects, co-ordination of development viability and monitoring processes, effective team working on a variety of interesting and challenging projects, as well as progressing the new local plan. Recent experience of representing evidence at planning appeals and local plan examinations would be an advantage.

"Stafford Borough is the largest district council in the county of Staffordshire, both geographically and in population. We are ‘going for growth’ with work on a new local plan to deliver significant development taking shape, including the opportunity to plan a new garden community of the future for around 10,000 new homes." 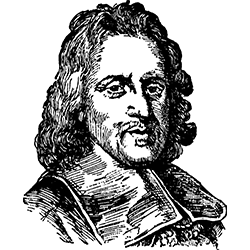 Fun fact: The writer Izaak Walton, both in Stafford in 1593, is best known for his The Compleat Angler (1653), a guide to angling much beloved of fishermen (and women). But he was also known for his biographies of people he liked, including his friend, the poet John Donne.

What is less well known is that he risked his life to protect one of the Crown Jewels during the English Civil War. A staunch Royalist, he somehow obtained the jewel - known as the Lesser George - after Charles II's defeat at the Battle of Worcester. At the time, Walton was living at a property beside a river he had retired to in Shallowford, near Stafford. He was entrusted with safely returning the gem to London, from where it was smuggled overseas to Charles II, who was then in exile.

Walton spent the last 40 years of his life visiting eminent clergymen and other who enjoyed fishing. He lived to the very ripe age of 90 and is buried in Winchester Cathedral.

The job: "This is an exciting opportunity to join the team responsible for driving forward plan-making on behalf of three central Lancashire authorities of Preston, Chorley and South Ribble. We are pressing forward to deliver a new plan to meet the Government target of adoption by 2023, and are looking for an experienced planning policy officer to help deliver this.

"As a planning officer working on the local plan, you will help the councils with a review of the existing policies, identifying sites for future development and assist with all elements of plan production, including data management, development of the evidence base, mapping and stakeholder engagement.

"You will be employed by Chorley Council and be accountable to all three councils and, whilst based at Chorley Council offices, you will be expected to work flexibly across the three boroughs. You will be a key part of the team, supporting both local plan coordinator and the wider team on the preparation of the plan." 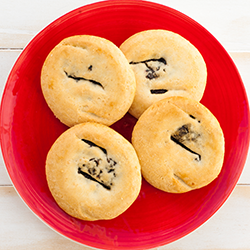 Fun fact: Chorley is home to the Chorley cake, a close relative of the more widely known Eccles cake, but with some pronounced differences. The cake is made by sandwiching currants between two layers of unsweetened shortcrust pastry (Eccles cakes use puff pastry). Sometimes sugar is added to the fruit or sweeter raisins are used. Chorley cakes are known locally as fly pies.

Each October, a Chorley Cake street Fair celebrates the local delicacy and invites local bakers to compete over who can make the biggest Chorley cake. Obviously, Chorley cakes are not to be confused with 'sad cakes' which are very similar indeed, but later, differently shaped and found in Darwen, Blackburn and elsewhere in the Rossendale area.

The job: "We are looking for a customer focused experienced professional to join our busy development management team, dedicated to looking after the exceptional and stunning environment of North Devon - made up of its coastline, moors and historic urban and rural settlements centred on the UNESCO Biosphere Reserve of Braunton Burrows, whilst ensuring that development is of the highest quality. The area provides an outstanding quality of life for its residents and a positive working environment in which you will find an ideal work life balance.

"You will be involved in: 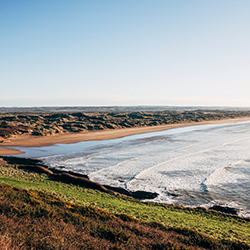 Fun fact: Braunton Burrows within the North Devon district is at the heart of the UNESCO designated North Devon Biosphere Reserve and the second largest sand dune system in the UK. It hosts an extraordinarily diverse plant community, with more than 400 recorded species of vascular plants and a wide range of invertebrates.

The site is co-called because of the very large number of rabbits that burrow into the dunes, creating a unique environment through their grazing: the dunes are characterised by their short, cropped herbs and grasses, many growing shorter than they normally would.

Among the plants on the site are purple thyme restharrow, mouse-ear hawkweed, viper's bugloss and large numbers of pyramidal orchids. The dunes' creeping willow is home to large numbers of brilliant red poplar leaf beetles. On a sunny day, butterflies such as marbled whites, graylings, ringlets and skippers are abundant.

The job: "We are recruiting for a project lead with site promotion and planning policy experience to join our wider in-house team of planning professionals. We are looking for an enthusiastic and dedicated person who will fit in with our collaborative culture.

"As the project lead, you will lead an existing team who are instrumental in developing the land assets of the business and maximising the planning prospects of the land it promotes.

"Your focus will be the promotion of sites within the company land portfolio achieved by engagement with local authorities and by researching the potential planning opportunities within relevant areas. The Project Lead role also involves overseeing and preparing representations into planning policy consultations as well as giving evidence at local plan examinations." 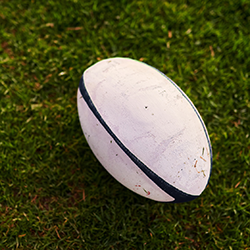 Fun fact: Congleton is home to the third oldest rugby union club in the country, dating back to 1860. In 2011, the Congleton RUFC hosted the world's longest known game of rugby, clocking in at 24 hours, 30 minutes and 6 seconds.

The game involved 44 players, most from Congleton but also down from neighbouring clubs across the Midlands and North West. The players were split into two teams - the Congleton Bears and the Mali Lions - and the match was hotly contested, with only 40 points in it until the final hours. Eventually Mali Lions pulled away to win 889 to 715.

The match raised money for charity and earned the club a place in The Guinness Book of Records.