It's the Friday Five - our weekly pick of five jobs from Planner Jobs, with location based facts to inform, educate and entertain you. To make the occasion of England's football team reaching their first major final for 55 years, these are all football related this week.

The job: "We’re looking for someone who has the passion and energy to lead an experienced team of planning policy professionals and help us drive forward the review of our ambitious  South Worcestershire Development Plan which  is joint plan between the three local planning authorities of Malvern Hills, Worcester City and Wychavon Councils.

"In addition, you will be responsible for all planning policy matters relevant to Malvern Hills and Wychavon District Councils and help our Development Management colleagues to interpret planning policy. Working collaboratively to achieve our strategic priorities, plans and objectives will be a key objective for this post.

"As the head of the policy team we will want you to be engaging and seek to convey your expertise in a way that is persuasive and positive for your team, your peers and key stakeholders." 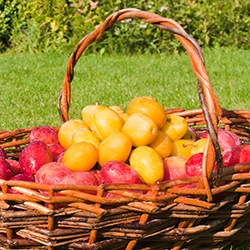 Fun fact: Pershore Town Football Club are nicknamed The Plums, on account of the town's long association with plums. Or, more specifically, the Pershore Plum which, our research suggests "was the mainstay of the plum industry in the Vale Of evesham from the mid 19th century until the early 20th century". The same source (Slow Food in the UK https://www.slowfood.org.uk/ff-products/pershore-plums/) informs us that there are in fact three varieties of Pershore Plum: the Yellow Egg Plum, the Purple Pershore and the Emblem.

So integral were the plums to the town's identity that an annual Plum Fayre was held, the publicity for which in 1920 boasted that it was "The Largest Plum Show on Earth". The fayre was revived as the Plum Festival in 1996, which runs throughout August and includes purple decorations around the town, a plum fayre and a farmers' market.

The job: Two positions available - one is permanent, the other a 12 month fixed term contract.

"The council’s place-shaping and economic growth service is looking for proactive, creative and customer focused officers to help to deliver sustainable, high quality homes and jobs across our diverse and characterful district.

"We are looking for enthusiastic candidates to work in our busy development management team.  In this role, you will handle applications for planning permission and other consents, contest appeals and undertake development monitoring. You will also provide pre-application advice and guidance in the pursuit of sustainable development and change." 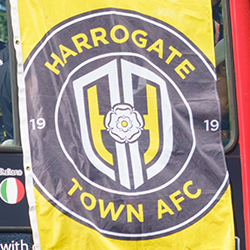 Fun fact: Harrogate Town AFC are a new addition to the English Football League, having won the National League playoff in 2019-2020, to enter the highest echelons of English football for the first time. It marked the high point of a 100-year journey that began with the club's first season in 1919-1920 in the local West Riding League.

But even this was a long wait. The club, founded as Hartlepool AFC in 1914, was in fact scheduled to play their first competitive match at Bishop Auckland on 5 September 1914. Two hours before kickoff, the hosts received a telegram from the Harrogate club explaining that they would have to cancel the fixture since war had broken out and most of the team and secretary had joined the army.

After the First World War ended, the club was reformed and finally played its first official fixture against Horsforth in the Northern League on 30 August 1919. Harrogate won the game 1-0 with a headed goal by one L Craven. No-one seems to know what the L stood for.

The job: "This is a rare and exceptional opportunity to provide leadership in one of England’s busiest and most improved unitary development management services within easy reach of London. You will have a wide reaching impact on the city including realising the goals set out by our City Plans and supporting our ambition to become carbon neutral by 2030.

"You will need a positive, solution-finding approach to work whilst achieving targets and meeting deadlines. You will be expected to provide positive and effective leadership to the team, be able to handle complex and sensitive matters and be effective at managing change.

"As a team leader, you will be expected to provide line management for up to eight case officers. You will be delivering projects, interventions and initiatives and developing policies (together with the policy team)." 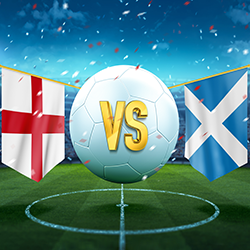 Fun fact: Brighton born William A Baillie-Hamilton was a civil servant of Scottish descent who was selected for the Scotland side that played the first ever international match against England at Kennington Oval on 5 March 1870.

Both teams were composed of an interesting selection of what appear to be mainly public schoolboys, including several MPs, and many of the Scottish players had somewhat tenuous connections to that country (it seemed that owning a shooting estate in the Highlands was sufficient qualification). Baillie-Hamiton himself was the son of an Admiral and a Lady and educated at Harrow. On leaving Harrow we worked for the Colonial Office, as private secretary to the Secretary of State for the Colonies and chief clerk of the Colonial Office. He also wrote a novel, intriguingly titled Mr Montenello: A Romance of the Civil Service which must have been, er riveting.

We digress. Baillie-Hamilton's own brother lined up alongside him, in addition to William H Gladstone MP. The game, which saw Scotland take the lead with what was described in the match report as a "rather fluky long kick" by a 17-year-old Harrow schoolboy, ended a diplomatic and face-saving 1-1.

It was the start of a lengthy rivalry that continues today. As of 2021, England and Scotland have played each other 115 times, with England having the upper hand on 48 victories, Scotland 41 and 26 draws (including the recent 0-0 at the Euros).

Location: Newcastle Upon Tyne or Glasgow

The job: "TNEI is a specialist consulting company that has been at the forefront of providing expert technical advice to electricity network companies, renewable energy developers, regulators and funding institutions for more than 20 years.

"We are looking for a full-time environmental planner with experience in the consenting of energy or infrastructure projects (either public or private) to join our environment and engineering team. The role involves working on all aspects of the development of renewable energy schemes throughout the UK with added responsibility for gaining access to new projects and clients, as appropriate.

Fun fact: Glasgow is famous for its two big clubs, Celtic and Rangers, whose rivalry has very much defined Scottish domestic football. However, there are two other professional clubs in the city: Patrick Thistle and, most historic of all, Queens Park (club crest pictured).

Indeed, Queens Park has fair claim to have been the most pioneering club in British football, having effectively invented the passing game - or at least, having integrated passing into the team's strategy at a time when football teams focused on 'dribbling' as the way to move the ball forward. Queens Park's game, described on Wikipedia as a "collective and scientific form of team based passing" was developed through rigorous training sessions and dubbed 'combination football'.

Found in 1867, the club dominated Scottish football in its early years, sweeping all before them. Having jointly formed the Scottish Football Association in 1873, they promptly won everything for years and didn't even concede their first goals until 1875. The club also competed in the FA Cup in England and twice reached the final, in 1884 and 1885, losing to Blackburn Rovers on each occasion.

Though their glamour and prominence faded over time, the club continued to play at Hampden Park, Scotland's national stadium in Glasgow and, incredibly, remained amateur for more than 150 years, despite playing alongside professional clubs. In 2019, however, the members voted to turn professional because they had lost so many good players over the years without being able to obtain transfer fees for them. The club now plays in Scottish League One, having won the League Two title in their second season as a professional club. Things are looking up.

The job: Three posts encompassing a range of roles within the development management team at Pembrokeshire County Council.

"The trainee planning officer post offers a programme of structured workplace training with the potential for external learning (funded by PCC) in order for the post holder to obtain a post-graduate qualification in planning.

"The planning officer/senior planner roles offer a career grade position and successful candidates will be appointed to either role depending on experience and RTPI membership. The roles will involve determining planning applications and providing statutory pre-application advice on a range of planning proposals, as well as assisting with enforcement investigations." 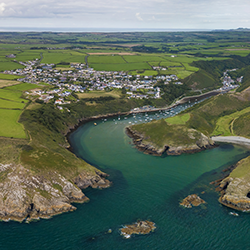 Fun fact: Pembrokeshire has produced a number of top rank football players over the years, but few return to their roots and play for their boyhood club when their career is winding down. Except for Simon Davies, that is. The ex Tottenham and Fulham winger was born in Haverfordwest in 1979, raised in nearby Solva and played for Solva AFC as a lad.

Spotted early, he signed for Peterborough United at 15 and soon established himself as a first team player. From 2000-2013 he enjoyed a successful career at the top level with Tottenham, Everton and Fulham as an attacking right winger and occasional scorer of spectacular goals. His crowning moment arguably came when scoring in the UEFA Europa League final in 2010 (although his team lost). But Davies also played for his country 58 times, and captained Wales during their 2010 World Cup qualifiers.

Released by Fulham in 2013, Davies signed for his boyhood club Solva AFC, playing in the Pembrokeshire League division two (Solva, pictured). From a salary of, apparently, £30,000 a week, he was required to pay £3 'subs' for every game. He was persuaded to sign for the club by his brother Chris, the team captain.