A round-up of five of the best jobs on Planner Jobs this week - plus a bonus fact with each!

The job: "Abergele Town Council are seeking to appoint a focused and enthusiastic individual to work as part of a small team. A good standard of education, graduate/NVQ level 5 or equivalent.  Knowledge or experience in managing community facing projects is essential.

"You will need to apply project management techniques. The ability to communicate in Welsh is desirable."

Fun fact: A recent genetic study found evidence for a heavy concentration of Roman soldiers in Abergele almost 2,000 years ago, their legacy left behind in the DNA of the modern population.

The research, which was looking at the genetic history of Europe, studied the Y chromosomes of men in Abergele. Membership in Y chromosome haplogroup E1b1b1a2 (E-V13) was found to average at 38.97 per cent in a small sample of 18 male Y chromosomes in Abergele. Apparently, this genetic marker is found at its highest concentrations in the Balkans (at a very similar percentage to that found in Abergele), but at much lower percentages in Northern Europe.

It's postulated that the chromosome was left behind by Roman soldiers who had been recruited in the Balkans. Notable levels of the sae markers have been found in other UK towns that were known to have had a heavy Roman military presence.

The job: "Gedling is an attractive place to live and work, and the council offices are situated in an award-winning park within easy reach of Nottingham City Centre and rural Nottinghamshire.

"The successful candidate will have a sound knowledge of planning law and best practice in relation to planning enforcement, be resilient under pressure, have excellent written and verbal communication skills and highly developed negotiation skills."

Fun fact: Alfred Shaw (1842-1907), born in Burton Joyce in Gedling, bowled the first ball in test cricket - against Australia, in Australia, in 1876. In the same match, Shaw also became the first bowler to take a five wickets in an innings.

A professional in a game that was run and largely populated by amateurs. Shaw's first class career lasted more than 30 years. He played mostly for Nottinghamshire, who he captained to four successive county championships from 1883-1886. He was a also a fierce advocate for the rights of professional players at a time when they are treated (literally) as second class citizens within the game, and he frequently butted heads with the cricketing authorities.

He was a remarkable bowler, who has the very unusual distinction of having bowled more overs than he conceded runs during his career. He also organised the first British Lions rugby union tour of Australia and New Zealand. In retirement he became a publican and died aged 64.

The job: "The South Downs is a unique national park by virtue of the number of large settlements within its boundaries and the opportunity for a wide variety of applications including a significant number of major schemes is a key element of the role.

"This position offers an ideal career opportunity to gain valuable experience of a wide cross section of rural, and urban planning schemes and some complex enforcement cases, all within the unique context of a national park. As a career grade role, your competency and progress in the post will be acknowledged and rewarded within the scheme and offers the opportunity for continuous personal development.

"This is a challenging role and with an area covering over 100 miles from the edge of Winchester to Eastbourne, and over 5,000 applications a year to process." 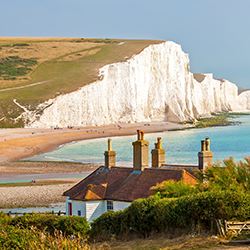 Fun fact: Beachy Head marks the eastern limit of the South Downs National Park. At 162 metres above sea level, it's the highest chalk cliff in Britain and has become a notorious suicide spot (the third most common in the world, apparently and the first recorded suicide happened here in the 7th century). However, there's plenty more of interest to note.

The name Beachy Head actually has nothing to do with hte word 'beach'. Instead it comes from Norman French - 'Beauchief', meaning 'beautiful headland'. But this was gradually Anglicised and it was commonly known as Beachy Head by the 18th century.

The remains of German social scientist, philosopher and co-founder of Communism Friedrich Engels were scattered from Beachy Head at his request. In the 1950s human remains found at the cliffs were found of a Roman woman of Sub-Saharan origin who lived in the area in 200-250 CE. More than one sea battle has been named after the cliffs and it was an important communications station during the Second World War.

It's also become an icon of popular culture, having made multiple appearances in film (famously 1979's Qudrophenia, when Pthe main character's scooter flies off the clifftop), in music videos (David Bowie's Ashes to Ashes) and on television (including a Monty Python sketch).

The job: "High Peak Borough Council and Staffordshire Moorlands District Council have a long running and successful shared service. As a planning officer within our development services team, you will be dealing with a varied caseload of planning and other applications and playing a key part in delivering sustainable development and contributing towards our ambitious economic growth plans.

"The Alliance is nationally recognised for its heritage regeneration programme and works closely with the Peak District National Park Authority." 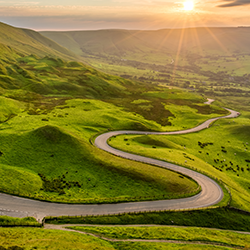 Fun fact: Staffordshire Moorlands is home to Flash, which claims to e the highest village in Britain. The village, also known as Quarnford, stands 463 metres above sea level, although its claim to be the highest is disputed by the village of Wanlockhead in Dumfries and Galloway.

In 2007, the BBC tested the claim and worked with the Ordnance Survey to measure the highest house in each village. Flash was found to contain the highest point, though the claim is understandably disputed. Recently, the village of Nenthead in Cumbria has also laid claim to being Britain's highest village and describes itself as such on its website.

The job: "Green Planning Studio is a planning-led, multi-disciplinary consultancy based at Upton Magna near Shrewsbury, working on cases across England and Wales. We specialise in winning planning consents in areas of development constraint, particularly in rural areas.

"We have an expanding workload and are looking to appoint a senior planner to take responsibility for case work from initial enquiry to determination, including appeals. Whilst GPS work in a wide range of areas, specialist knowledge in material change of use of land cases and/or mobile home site cases and/or certificates of lawfulness cases would be an advantage."

Fun fact: Upton Magna is notable for containing what some claim to be the oldest still-standing cottage in Europe – the grade II listed Cruck Cottage. The claim is based on carbon dating of part of the cottage's structure - its crucks, curved oak beams that support the roof of the building along its length.

Though the cottage largely dates from the 15th to 16th centuries, dendrochronological tests on two internal pairs of crucks dated the timber to 1269. It's speculated that they are part of an original building which was subsequently remodelled.

The word cruck, which comes from the Old Norse word for a hook, also gives us 'crook' (as in a shepherd's crook) and 'crooked'.