The job: "This is a high-profile position within the development management team in the environment, housing and neighbourhoods directorate. As planing manager, you will be delivering high quality decisions on major/strategic applications and co-ordinating the DM team response to and resourcing of corporate priorities around regeneration.

"You will lead on the delivery of high quality schemes within the borough, providing management support as well as finding good outcomes through innovative thinking. You will also lead on negotiations on major/strategic schemes and ensure good value for money when negotiating planning performance agreements.

"This role has direct line management responsibilities for three members of staff and a total of 18 staff in the DM team as a whole." 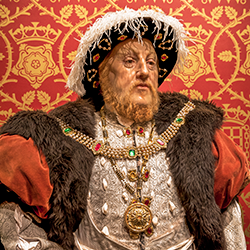 Fun fact: Nonsuch Park in Sutton was once home to the magnificent Nonsuch Palace. Perhaps Henry VIII's grandest building project, it was started in 1538 and not completed until 1556, some years after Henry's death. The palace was called Nonsuch because it was believed it would have no equal.

Sadly, the magnificent house,  which experienced an eventful ensuing century which included the English Civil War and the execution of Charles I, was pulled down and the materials sold off by a king's mistress to pay her gambling debts. The palace had passed through numerous hands, especially during the war, but was returned to the monarchy with the Restoration in 1660. A decade later, Charles I gifted it to his mistress, Barbara, Countess of Castlemaine, along with the title Baroness of Nonsuch. She, however, was an inveterate gambler and racked up such huge debts that the only way to pay them off was to dismantle the palace and sell its parts.

No trace remains in situ today, although there are fragments in the British Museum and its wood panelling can still be seen in the Great Hall at Loseley Park, near Guildford in Surrey.

The job: "Broxbourne Borough Council is seeking to recruit a planning enforcer to join its dedicated team, either at a senior level or at principal officer level, dependent on qualifications, skills and experience.

"The working environment is diverse and interesting with both green belt and urban landscapes, including a variety of residential, commercial and retail sites. You will be given responsibility as lead officer for identifying, investigating and remedying breaches of planning control across the borough.

"Additionally, the officer will be responsible for supervising staff within the planning compliance team, drafting and serving notices and presenting and giving evidence at planning appeals and in court." 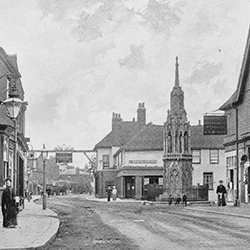 Fun fact: Waltham Cross, within Broxbourne, is most likely so-called because it is the location of an 'Eleanor cross', one of a dozen similar monuments erected by Edward I in memory of his wife, Queen Eleanor.

Eleanor died in 1290 in Nottinghamshire while en route to visit her husband of 36 years while he was waging war in Scotland (he did a lot of that). Her body was taken first to Lincoln, where she was embalmed and where her viscera were buried in Lincoln Cathedral. She was then transported the 180 miles to London, where her body was buried in Westminster Abbey.

The journey took 12 days and Edward ordered that a monument be sited at each of the locations where the procession stopped overnight. The first was in Lincoln; the final one in a village called Charing, now known as Charing Cross. Just three of the monuments survive, at Geddington, Hardingstone and Waltham Cross.

The job: "In this varied role, you will make a difference by managing planning enforcement, building control and environmental enforcement areas of the business, shaping the strategic direction of the service. You will also maintain a high quality operational delivery and lead the day-to-day management of a national award winning team.

"The team delivers services across 53,665 hectares within one of the largest unitary authorities in the UK. South Gloucestershire has one of the highest growth rates in the country and 22,000 new homes are currently planned over the next 20 years and work is already underway to develop a new West of England Joint Spatial Plan. You will also ensure that we benefit and meet green belt provision, maintaining compliance with agreed planning permissions and building regulations. 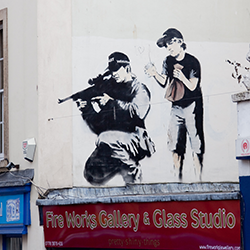 Fun fact: Robin Gunningham, the person considered most likely to be anonymous street artist and political activist Banksy, was born in Yate in South Gloucestershire, in 1973.

Speculation about Banksy's identity has been rife since he emerged from the Bristol graffiti scene in the 1990s. His satirical street art, which makes use of a quickfire stencilling technique to avoid detection, contains social and political commentary and has appeared on buildings throughout the world. It's become highly collectable and has appeared in galleries, too (notoriously, an auctioned piece partially self-destructed during the auction a  couple of years ago).

Banksy's identity has never been publicly revealed. Among the names regularly put forward are Robert del Naja, a member of the band Massive Attack; and Jamie Hewlett, a comic book artist best known for his work with Gorillaz. However, Gunningham remains the top pick. Former schoolfriends from Bristol Cathedral School have apparently corroborated his identity; the DJ Goldie once unthinkingly referred to Banksy as 'Rob' during an interview; and The Sunday Times claimed that Gunningham used the name Robin Banks as a pseudonym, eventually becoming just Banksy. Queen Mary University even conducted geographic profiling which concluded that Gunningham was the man.

Gunningham himself denies this. But he would, wouldn't he? Anyway, does it matter who Banksy 'really' is? He's Banksy. That's all we need to know, right?

4. DIRECTOR OF PLANNING, PRIVATE SECTOR CONSULTANCY BASED IN YORKSHIRE

The job: "A multi-disciplinary business focused on rural development and diversification working throughout the UK with a varied client base with diverse land and property interests is seeking a director of planning.

"In this role, you will be providing senior leadership across the business, expanding networks and creating relationships with key stakeholders, including local authorities.

"You will contribute to motivating, developing and managing the planning team's performance and the performance of multi-discipline teams you are a part of. You will be mentoring colleagues and peer review responsibilities to ensure excellent standards of work and project management." 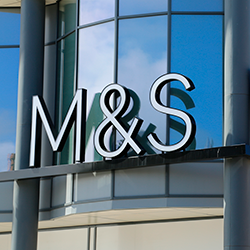 By 21 he was working as a book-keeper in Leeds for a wholesale company. It was though this that he met Michael Marks, a Polish immigrant who had borrowed money from Spencer's employer to run his market stall. Spencer's wife helped Marks with his English and in 1894, when Marks opened a permanent store in Leeds market, he invited Tom Spencer to become his partner. Thus, Marks & Spencer was born.

They split the operational work between them, Spencer concentrating on running the office and warehouse, while Marks focused on the retail itself. Spencer used the contacts obtained in his previous job to deal with manufacturers directly and obtain the best prices for the goods the company sold. They grew quite rapidly, opening market stalls across the north west of England and building a reputation for selling only British made goods (a policy that lasted until the late 20th century).

Spencer died in 1905 at just 53. In 1998, the firm he co-founded became the first British retailer to make a pre-tax profit of more than £1 billion.

The job: "Two new roles have been created within the development management team, to achieve quality place making outcomes for the existing and future communities which will be created in our district.

"The roles will be demanding yet varied and rewarding, working towards providing development which has taken into consideration the need to address climate change, as well as affordability and infrastructure needs.

"The postholders will be key members of the team, taking responsibility for their own caseload as well as positively contributing to the development management Team. In this role, you will lead on major planning applications and will have substantial experience in negotiating and formulating planning performance agreements, lead on pre-application discussions, processing complex planning applications, negotiating s106 agreements and providing excellent customer service.

"The role will also require you to be the lead on major planning appeals, including public inquiries." 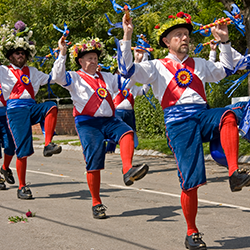 Fun fact: Thaxted, a small town within Uttlesford, is home to Britain oldest 'revival' Morris side. Thaxted Morris Men was founded in 1911 by the vicar of Thaxted in response to a renewed interest in Morris dancing. Initially the side performed locally as part of coronation celebrations for George V.

Along with four other Morris sides, Thaxted Morris Men were founding members of the Morris Ring, a national Morris dancing organisation that now numbers 180 sides and organises regular meetings.

The annual Thaxted Morris Weekend, which takes place each Spring Bank Holiday, sees teams from across the UK and the world conduct dancing tours around neighbouring villages, culminating in a final event in Thaxted itself. The Morris Weekend has become a major tourist attraction.

Morris dancing is a form of English folk dance, the earliest mention of which occurs in 1448. It takes the form of rhythmic stepping by a group of dancers, who are usually wearing bell pads on their shins and may carry such implements as sticks, swords and handkerchiefs.