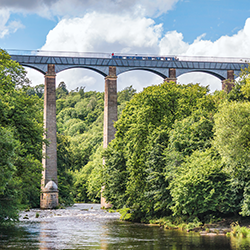 The Canal & River Trust office in Navigation Road, Northwich, Cheshire; or Red Bull Wharf in Stoke-on-Trent, Staffordshire. Both venues are next to waterways, naturally.

"At the Canal & River Trust, our work is focused on making life better by water. Set up in 2012 to care for waterways across England and Wales, our vision is that living waterways transform places and enrich lives.

"As part of our spatial planning team, you’ll manage a diverse, high-volume workload across the North West and North Wales. You’ll handle both planning consultations and planning policy matters, working closely with local planning authorities and communities, as well as Trust specialists. The consultations could range from EIA-scale development to ‘minor’ and ‘householder’, and it will be down to you to provide advice, negotiate planning conditions and planning obligations and represent us in any appeal. Your policy responsibilities will mean responding to consultations on a variety of policy documents to support the work of the Trust."

The Canal & River Trust is a charity tasked with looking after and "bringing to life" 2,0000 miles of waterways across England and Wales. "These historic, natural and cultural assets form part of the strategic and local green-blue infrastructure network, linking urban and rural communities as well as habitats. Our waterways are on the doorstep of 8 million people."

The Pontcysyllte Aqueduct in north-east Wales is one of five Unesco world heritage sites in the canal network in England and Wales, and the highest canal aqueduct in the world. It's also the longest aqueduct in Great Britain.

The spectacular 18 arch stone and cast iron structure carries the Llangollen Canal for 300 metres across the River Dee in the Vale of Llangollen at a height of 38m. It was completed in 1805, having taken ten years to design and build. Built to serve industry, nowadays it's one of the most popular canals in the UK for holidaymakers. 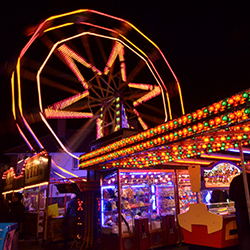 Purpose-built council offices in the green outskirts of Tewkesbury, Gloucestershire.

"Along with a stunning built and natural environment and rich history there is huge development pressure. Tewkesbury Borough is at the heart of the M5 economic growth corridor and is preparing to manage up to 40% of Gloucestershire’s entire growth through the recently adopted Joint Core Strategy developed with our neighbours at Gloucester and Cheltenham.

"Planning enforcement is of course crucial to the successful delivery of new development and we are looking to recruit an enthusiastic and proactive planning  and enforcement professional with a flair for positive decision-making to help with our varied and challenging work."

A mid-sized borough in Gloucestershire with a population of around 90,000, Tewkesbury borders both Cheltenham and Gloucester, and contains a chunk of the Cotswolds AONB. It contains 14 conservation areas, 1,800 listed heritage assets and the historic market towns of Tewkesbury and Winchcombe.

Each October Tewkesbury holds a 'mop fair'. Historically, this was an occasion where people came to seek employment, bearing an item signifying their trade. A servant with no particular skills would carry a mop head - however, the term mop fair is though to derive from the tassle - or 'mop' - worn on the jobseeker's lapel which was the emblem of their trade.

Mop fairs date from attempts to regulate the labour market at a time of shortage after the Black Death in the 1350s. Farm workers, servants adn craftsmen would typically work under contract from October to October - hence the October date for the fair, when they were seeking new work. Nowadays, the Tewkesbury Mop Fair is run as a funfair. 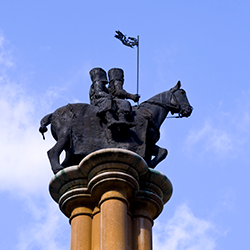 Spanking new offices with a dramatic glass facade on the edge of the town centre in Newcastle-under-Lyme, Staffs.

"We are looking for either a senior planning officer or a planning officer to fulfil a key role in the planning policy team. The council is preparing a joint local plan in partnership with the neighbouring authority of Stoke-on-Trent City Council, which will replace our joint core strategy.

"Alongside this the council is working to strengthen the area’s economic potential and participating in the Cheshire and Staffordshire Constellation Partnership to optimise the potential economic investment arising from the HS2 project. This provides an exciting opportunity for you to work with partner authorities and the Cheshire and North Staffordshire LEPs to support the development of a longer term growth strategy."

Newcastle-under-Lyme is market town and mid-sized borough neighbouring Stoke-on-Trent. Most of the borough is part of the Potteries Urban Area, and includes the towns of Newcastle-under-Lyme and Kidsgrove, as well as Keele University. It's midway between Birmingham and Manchester, and just a hop and a skip from the Peak District National Park.

Keele has a longstanding association with the Knights Templar and the Knights Hospitaller, who profited from their ownership of land on a popular travel route. Keele Preceptory had been granted to the Knights Templar in the mid 12th century by King Henry II. The Templars - and later the Hospitallers -  would charge incoming traffic to pass through their lands, supplementing rental income from farming tenants.

Little remains today of the Templar's heritage and less so of the Hospitallers. However, the bypass between Newcastle-under Lyme and Madeley contains an iron sculpture of Knight Templar in commemoration of their presence in the area. 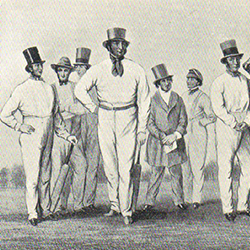 County hall in Kingston-upon-Thames (confusingly not actually in Surrey, but the London Borough of Kingston). Fittingly, it was used as a location in The Wrong Mans, a comedy drama about a planner.

"The post holder will be part of a small minerals and waste policy team. The policy team undertakes a statutory function in ensuring the minerals and waste development plan documents are up to date and that council policies are implemented and monitored. The post holder will work collaboratively with officers across the directorate and with partners locally, regionally and nationally. Projects include the delivery of new Surrey waste and minerals plans.

"Surrey is a relatively small but populous and wealthy county, covering a swathe of towns and villages south east of London. Most of the county is Metropolitan green belt and Surrey has the highest proportion of woodland in England. Surrey County Council is apparently looking into moving its base into Surrey itself, with Woking and county town Guildford the favourites to become its new home.

The first mention of cricket in history suggests the game was played at what is now the Royal Grammar School in Guildford in the 1550s. During a 1597 legal case, local coroner John Derrick (aged 59) recalled playing the game on a disputed piece of land while a pupil at the school in around 1550.

The recording of proceedings notes that: "Being a scholler in the ffree schoole of Guldeford, hee and diverse of his fellows did runne and play there at creckett and other plaies."

History does not record what the "other plaies" were. 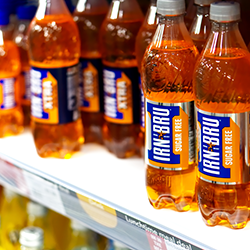 5. A TASTE OF SCOTLAND

The Cube, Corby -  a dramatic, mirrored office building and arts centre in the shape of a - erm - cube, next to the cinema in Corby town centre, Northants.

"We are looking to recruit an enthusiastic and committed planning assistant to join our busy local plan team. You will primarily be responsible for the monitoring of the local plan, including new housing, employment, retail and leisure developments, as well as improvements to local biodiversity and open space. You will also assist in the compilation of statistical returns and reports, and prepare information for and update our web pages.

"Our ideal candidate will preferably be educated to graduate or equivalent level with a keen interest in planning."

Corby is a mid-sized town and borough in north Northamptonshire, built on the steel industry.

Asda in Corby allegedly sells 17 times as much Irn Bru as any other store in England. The reason? Around a third of the town's population is either Scottish born or claims Scottish descent as a result of the large influx of Scottish workers to drive Corby's steel industry from the 1930s on.

Sometimes knowns as Little Scotland, Corby has an accent that some describe as sounding Glaswegian, Scottish regional and sporting clubs, an annual Highland Gathering and a large number of Scottish goods in local shops. Apparently, all bars, nightclubs and pubs in the area serve Irn Bru, too.