'It's Friday, so it must be time for The Friday Five,' thought nobody, ever. But we do it anyway, because we're nothing if not persistent. Here's this week's selection of excellent planning jobs from The Planner Jobs. Plantabulosa!

The job: "This is an exciting time to be part of the team working directly with Mayor Dan Jarvis, the Sheffield City Region Mayoral Combined Authority (MCA), and the Local Enterprise Partnership (LEP). Devolution has never been higher on the political agenda, and the MCA and LEP are playing an increasingly important role in shaping our economy. From transport to housing, from business growth to skills, the Sheffield City Region has a great story to tell. We have ambitions to deliver a rapid recovery and renewal for people, businesses and places across South Yorkshire following the Covid pandemic.

"We are seeking a dynamic manager with a proven track record in developing economic and regeneration projects to join our dynamic, high functioning housing, infrastructure and planning team. You will be responsible for undertaking research, and developing policy, projects and programmes  to support economic growth, regeneration, and placemaking, including developing integrated infrastructure packages based around key growth areas." 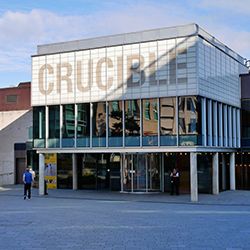 Fun fact: The World Snooker Championship has become synonymous with the Crucible Theatre in Sheffield, having been held there annually since 1977. A world championship of sorts had been played since 1927 at various locations and in various formats, often as a supplementary event to a two-week billiards game - billiards being the more established sport at the time. As the championships progressed, matches became longer - with finals of up to 71 frames over a week or more - and the format sometimes involved just a one-off challenge match rather than a tournament.

Gradually a more television-friendly format evolved, accelerating with the move to the Crucible in 1977. Before then, world championship snooker was rarely seen on television. By 1978 there was a daily highlights show; the following year, parts of the final were shown live. By the mid-1980s the nation was 'Snooker Loopy', and a third of the UK population watched the nail-biting final frame of the 1985 final well after midnight. The sport's long-running relationship with the Crucible Theatre continues.

The job: "We are not your average local authority planning department. We are a forward thinking, innovative and fun team, offering a great working environment, a wide range of projects and career development opportunities.

"We deal with a comprehensive range of development types, ranging from bespoke rural schemes to large scale commercial development and a 4,250 home new community which is currently under construction. We are positive, customer focused and passionate about creating a great place to live, work and visit.

"We are in a period of growth, with more planned, and development levels are at their highest for some time. We are therefore looking for an experienced planner to join us, for a fixed term period, to help us to respond to this increased demand." 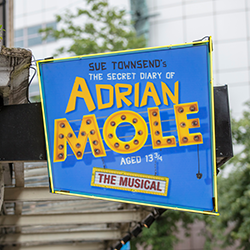 Fun fact: The author Sue Townsend, who created Adrian Mole in the 1980s, grew up in the village of Glen Parva in Blaby District. The daughter of a postman and a canteen worker, she left school at 14 and worked as a packer for Birds Eye and a petrol station attendant. By 25, she was a divorced mother of three and living in poverty. But she had started writing.

Hard-earned success came in the early 1980s with The Secret Diary of Adrian Mole Aged 13 3/4. Humorously recounting the innermost thoughts of a typical English schoolboy in the early 1980s, it was a huge success and spawned follow-up books and a play. Townsend wrote other works, too, often satirical and political, as well as plenty of journalism. Reputedly, a number of characters in the Adrian Mole books were based on people she knew growing up in Glen Parva. She died in 2014, aged 68.

The job: "West Lindsey is one of the largest districts in England, predominantly rural and with its administrative centre in Gainsborough on the River Trent, nestling into the Lincolnshire Wolds, an Area of Outstanding Natural Beauty (AONB). The development management team receives over 1,500 applications a year for planning permission, listed building consent, advertisement consent and other related applications.

"We are now looking for an enthusiastic person to join our development management team, where you will be responsible for taking on a diverse caseload of planning and related applications. Whether recently qualified or an experienced officer, to succeed in this role it is essential that you are outcome-focused and dedicated to achieving high-quality development. You should have a sound understanding of current and emerging planning legislation, be a good problem solver and able to identify solutions that will achieve the best results for both our applicants and communities. You will be the lead planning officer for a diverse caseload of applications, and supported by senior colleagues as your knowledge and career develops." 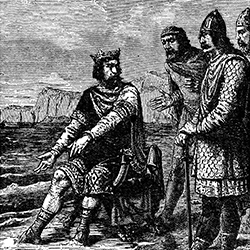 Fun fact: Gainsborough is reputedly where King Canute attempted to turn back the tide to demonstrate the vanity of power to his courtiers. The town is an inland port on the River Trent and was the place where the Vikings under Sweyn Forkbeard and his son Cnut arrived with an army of conquest in 1013. Having sent the Anglo Saxons packing, they made Gainsborough their de facto capital.

Forkbeard died a few weeks later, making Cnut King of England. The famous tale of turning back the tide may have taken place in the River Trent at Gainsborough, which is the furthest reach of a tidal bore called the aegir. Cnut's act, which wasn't written down until a century later and is probably a myth, was intended to show that secular power is vain compared to the supreme power of God.

Over two decades, Cnut built a strong power base across England, Norway and Denmark and is generally considered to have been an effective ruler. He died in 1035.

The job: "We’re Hallam Land Management Limited, the strategic land and planning promotion subsidiary of the Henry Boot Group of Companies. Our role is to promote and develop land opportunities through the complexities of the UK planning system. We now have an exciting opportunity for a proactive and loyal development planner to join our business. Our office is based in Northampton, however we welcome agile hybrid working patterns. 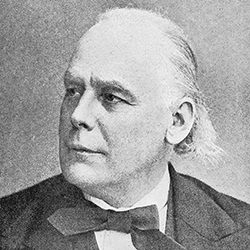 Fun fact: Charles Bradlaugh, Liberal MP for Northampton from 1880-1891, was an atheist who was imprisoned several times for illegally voting, having attempted to affirm as an MP with a solemn vow rather than a religious oath.

Born the son of a solicitor's clerk in East London in 1833, Bradlaugh left school at 11 and worked as an office errand boy and a clerk to a coal merchant. He was thrown out of his home for creating a furore for challenging Anglican doctrine while working as a Sunday school teacher.

Bradlaugh was taken in by a family of freethinkers. By 1858, he was president of the London Secular Society; by 1860 editor of the National Reformer. In 1866 he co-founded the National Secular Society and in 1880 was elected MP for Northampton. The electors of the town stood by him as he was thrown out of Parliament and subjected to by-elections on four occasions. In 1888 he won his lengthy battle with Parliament for MPs to have the right to make a solemn affirmation rather than a religious oath when taking up their seat. His funeral in 1891 was attended by a young Mohandas Gandhi.

The job: "Carrington West (recruitment agency) are assisting their local authority client based in West Yorkshire in their search for an enforcement officer on an initial five-month contract.

"The right candidate will need to be able carry out site visits, so must have access to their own car and a clean driving licence. My client is looking for someone with previous local authority experience that can come in and work on their own caseload with minimal supervision. On offer is an hourly rate of up to £30p/h depending on experience.

"This role will move quickly and is unique opportunity to join a growing local authority." 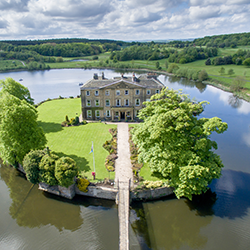 Fun fact: Walton Hall near Wakefield in West Yorkshire, was the site of the world's first nature reserve in the 1820s. The estate was owned by Charles Waterton, an aristocratic naturalist, explorer and taxidermist, who built a nine foot wall around five kilometres of the land and declared it a wildfowl and nature reserve. A nature reserve - Anglers Country Park - still exists on the estate, which is now a hotel and golf course.

Waterton was considered an eccentric but was really just forward thinking and arguably one of the world's first conscious environmentalists. Fascinated by the natural world, wildlife and exploration from childhood, he spent time exploring British Guiana as a young man, once walking barefoot to neighbouring Brazil.

His writings about his explorations and thoughts on nature and conservation inspired a young Charles Darwin and Alfred Russell Wallace; he is equally admired by David Attenborough. Waterton became a skilled taxidermist, introduced a new anaesthetic to western medicine, invented the bird nesting box, and was an early opponent of environmental pollution. Among his recorded eccentricities are a tendency to behave like a dog and bite the legs of guests at his house. They probably deserved it.