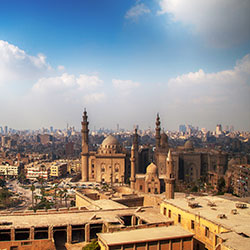 Nour El Nawawi, urban economic planner at Dar Al-Handasah, Cairo, Egypt,  talks about his work bridging the gap between the physical design and the socio-economic initiatives of projects.

My role as an urban economist/urban planner at Dar Al-Handasah, a multinational engineering consultancy, is a slightly odd one.

With most of my colleagues working as urban designers, my role is to bridge the gap between the physical design and the socio-economic initiatives of projects. Depending on the scale this could mean developing social enterprise frameworks, social infrastructure planning, regional development analysis, packaging investment projects or masterplanning.

Development pressure on Cairo is immense; the constant influx of people from the countryside means the built environment has developed rapidly – too rapidly – for the existing infrastructure. Housing has been haphazardly built with little consideration for the design of basic utilities and services. Development is sprawling to the east and west and investment in those areas has led to gated communities and extensive commutes. It has also meant the slow decay of downtown areas.

The planning process, often bureaucratic and inflexible, could be changed to help reduce these pressures. I would like to see a reduction of regulations such as setback distances, strict land uses and inflexible tenure systems. Informal developments as a result of landowners bypassing the formal system to avoid costs should be formally integrated into the city, as they are not currently recognised by the public planning bodies. There should also be a formal process that involves the community in planning their neighbourhoods.

Despite these problems, Cairo is packed with hidden gems and neighbourhoods where traditions remain unchanged. Even though I was born and raised in Cairo, I still make discoveries – from forgotten streets and local movies to live music venues and outdoor space for physical exercise. I enjoy living in a city with so much history; it makes the job of an urban planner even more interesting when one is exposed to that kind of environment.

* This article first appeared in the April 2016 issue of The Planner.